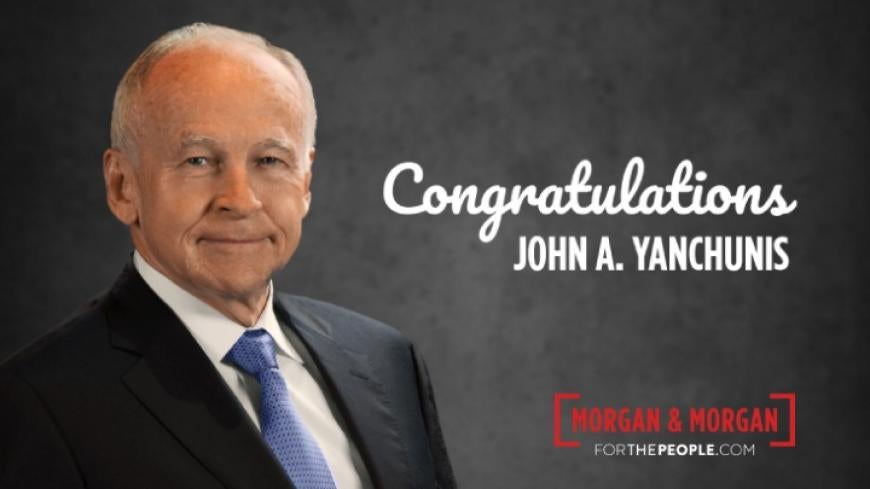 The Law360 2019 MVP awards have been announced, and Morgan & Morgan attorney John Yanchunis took home the prize as a leader in the cybersecurity category. He was one of 160 winners across 35 practice areas from all over the country.

Law360 is the nation's most respected legal news and analysis organization. Its annual MVP honors are awarded to attorneys who “have distinguished themselves from their peers by securing hard-earned successes in high-stakes litigation, complex global matters, and record-breaking deals.”

Upon learning of the award, Yanchunis responded by giving credit to the Morgan & Morgan lawyers and support staff who make his work possible.

“It takes a village, and many hands contributed to the successes that resulted in this recognition,” he said. “I am very fortunate to work with incredibly talented lawyers and staff.”

“Over nine years ago, John Morgan afforded me the opportunity to join this amazing firm, and his support, along with so many of you, have given me and the lawyers and staff I have the privilege of working with the foundation to achieve significant results for consumers across this country,” Yanchunis said.

Here at the firm, we’ve all come to expect this kind of humility and grace from the honoree, but in our opinion, this MVP award is well deserved.

Representing the People Against the Powerful

Yanchunis has been a leader in the fight for consumer protection for more than 36 years. For decades, he has pursued aggressive, audacious, and effective class actions and other complex litigation tools in the battle to hold major organizations like corporations and governments accountable for the harm they’ve caused.

In his nine years with Morgan & Morgan, Yanchunis has overseen explosive growth in our complex litigation department and has led historic class actions and multidistrict litigations. His victories for clients all across the country have led to increased safety and security for millions of everyday Americans.

Just this year, Yanchunis concluded one of the biggest cybersecurity class actions in American history with a $117 million settlement with Yahoo. The company had failed to protect the user data of more than a billion accounts, leading to a massive hack of that data. After years of fighting, Yahoo was forced to pay up and make it right.

Yanchunis has been a leader in the fight for consumer protection for more than 36 years.

But Yahoo is just the tip of the iceberg. Dozens of class actions against other corporations and organizations that have failed to protect valuable data are in the works, and everyone else is officially on notice: If you fail to take the protection of your clients, customers, patients, users, and staff data seriously, you will be held accountable.

Leader in the Fight

All of this has combined to make the Morgan & Morgan complex litigation team one of the most respected legal forces in the country by its peers — and one of the most feared by the defendants it goes up against.

Congratulations on this well-deserved award, and here’s to many more years of fighting for the rights and protections of our friends, families, and neighbors across the country.

Have you been a victim of a cybersecurity breach?