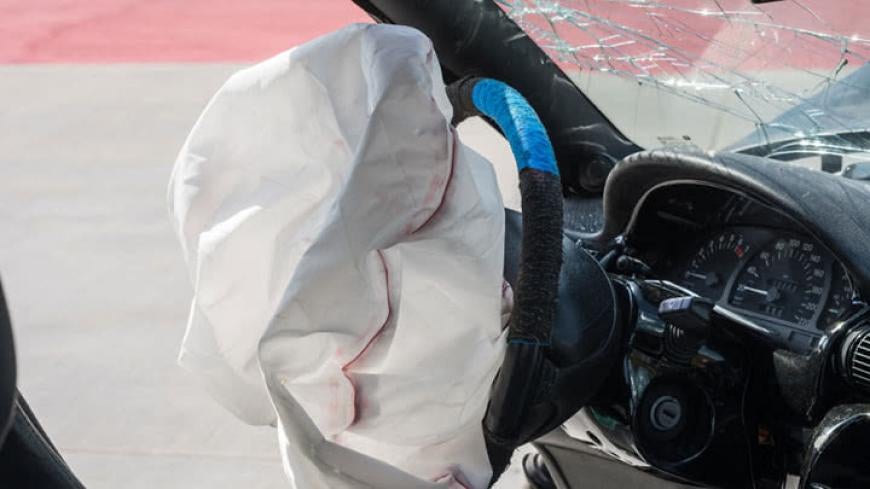 The Takata airbag recall has now reached the top.

Mark R. Rosekind, the head of the National Highway Traffic Safety Administration (NHTSA), says that his family car has joined the ranks of the 29 million recalled American vehicles. But like millions of others, even Mr. Rosekind has to wait (and wait, and wait) for replacement parts to arrive before automakers can repair his wife’s vehicle.

“I now have that personal experience to be able to deal with it and see how we can push," Mr. Rosekind told the Associated Press. “It is a source of information that probably typically is not available to an administrator facing something like this.” (Mr. Rosekind declined to identify the make and model of his wife’s car.)

In March, Toyota added 331,000 more vehicles to what is already the largest auto recall in American history. Worldwide, Toyota has now recalled 15 million vehicles—and that might just be the tip of the iceberg.

Incredibly, 90 million more vehicles could be affected by the Takata airbag safety issue, according to auto safety regulators. Senator Bill Nelson (D – Fla.), the ranking member of the Senate Commerce Committee, has taken Mr. Rosekind to task for not recalling every vehicle with an ammonium nitrate airbag. Mr. Nelson has also criticized Mr. Rosekind’s grasp of the Takata issue and relevant data.

The New York Times, which has played a key investigatory role in unraveling the Takata story, has called the airbag snafu “one of the country’s biggest consumer safety problems.” To date, the faulty airbags have caused at least ten deaths and 139 injuries.

Why are Takata airbags so volatile? Because they contain ammonium nitrate, a powerful chemical compound more commonly used as a mining explosive. The ammonium nitrate serves as a propellant, allowing the airbags to deploy in the event of a crash.

Detectives initially considered the incident a homicide due to the stab wounds in her neck.

But in the faulty Takata airbags, the ammonium nitrate becomes unstable, causing the airbags to explode upon deployment. (There is an even greater risk of this happening in humid areas like Florida.) This explosion can break the metal inflators in the airbags and shoot pieces of shrapnel into the vehicle’s cabin, putting drivers and passengers at risk for serious injuries and death.

The injuries are so violent, in fact, that in the case of Hien Tran, detectives initially considered the incident a homicide due to the stab wounds in her neck. It wasn’t until a week later, when they found a letter from Honda in Ms. Tran’s mail, that they realized her Accord’s faulty airbags were responsible for the gashes. Ms. Tran passed away in October 2014—the third of at least ten deaths tied to Takata’s airbags.

What makes these deaths even more sickening is that Takata knew its product was flawed, but they concealed and manipulated the data. Internal emails unsealed earlier this year show (among other exchanges) Takata engineer Bob Schubert writing to coworkers, “Happy Manipulating!!!” Mr. Schuberg also talked openly of diverting attention away from poor test results, and trying “to dress it up.”

In August 2009, Honda asked Takata to redesign the airbags without informing U.S. regulators, which suggests they knew the airbags were faulty. Legal experts say this admission could doom them in court.

John Kristensen, a Los Angeles-based liability plaintiff lawyer, told CNBC that Honda executives “made a determination of a defect when they asked for the fail-safe design. They had an obligation to tell the government back in 2009. Good luck defending that.”

Takata Penalty Could Be Largest in History

Honda didn’t drop Takata as its airbag provider until November 2015, alleging that the company’s data had been “misrepresented and manipulated.” That same day, the NHTSA echoed the charge and leveled a $70 million penalty against the Japanese supplier. (If Takata fails to comply with NHTSA demands, the fine will nearly triple to $200 million: the largest in the history of the auto industry.)

Takata allegedly knew of its airbag problems as early as 2004.

The New York Times says Takata knew of its airbag problems as early as 2004. And yet, when the first airbag exploded that May, in a 2002 Honda Accord, Takata wrote the incident off as “an anomaly.” The company didn’t acknowledge that millions of its airbags were defective for more than a decade, in May 2015.

In light of the revelation that Takata knew of the dangers, the family of Gurjit Rathore wants to reopen its wrongful death suit against the company. Ms. Rathore died in 2009 after her Honda Accord’s airbag fired shrapnel into her neck and chest. The family settled in 2012 for $3 million, but that was before they knew the whole story.

A Takata spokesperson said the notion of reopening the suit “has no merit.”

If you or a loved one has been cut by shrapnel from a Takata airbag, don’t hesitate to fill out a free case evaluation form.

Unfortunately, the list of vehicles affected by the Takata recall continues to grow by the millions. Unwilling to stand by and watch people suffer, Morgan & Morgan is now exploring lawsuits against Takata.

If your vehicle is on the recall list, and you or a loved one was cut by shrapnel after the airbags deployed, you may be able to file a lawsuit against Takata. By doing so, you could collect compensation for any losses stemming from your injuries. These might include medical bills, lost wages, special accommodations (e.g., home healthcare aides), or pain and suffering.

If you are acting on behalf of a loved one who suffered fatal injuries from a Takata airbag, you and your family may be entitled to additional compensation for funeral expenses, loss of companionship or consortium (marital benefits), or loss of support and services.

Morgan & Morgan has a long and successful track record of fighting the powerful, for the people. We will hold Takata accountable for its inexcusable actions the way we did Big Tobacco, against whom we won $90 million in settlements.