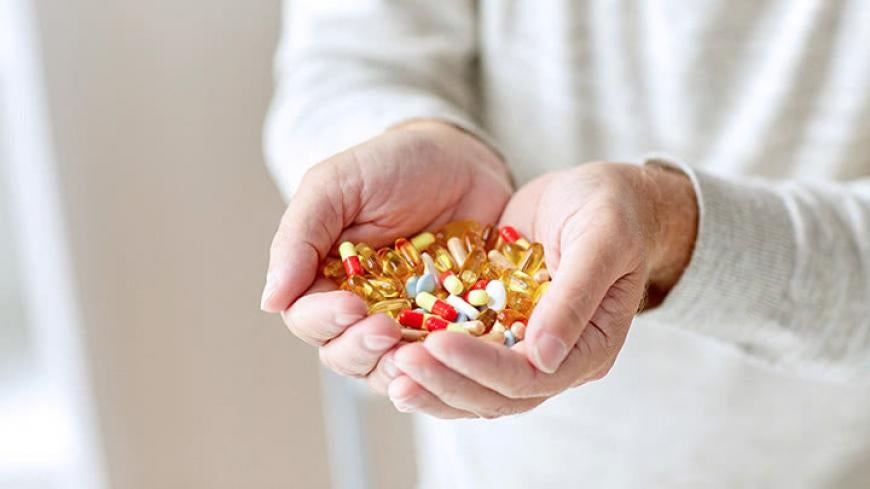 The U.S. is only one of two countries in the world that allows direct-to-consumer drug advertising, and we may be paying a heavy price for it.

It’s difficult to watch television without hearing “ask your doctor” blaring from the latest pharmaceutical commercial.

In 2016, direct-to-consumer drug advertising was the sixth largest advertising category in the U.S.

Yet, these commercials that are so commonplace in the U.S.—80 air every hour, according to Nielsen—are a unique phenomenon. In fact, the only other country where direct-to-consumer drug advertising is legal is New Zealand.

In 2016, direct-to-consumer drug advertising was the sixth largest advertising category in the U.S., and it continues to grow.

Now, leading groups like the American Medical Association are calling for a ban on consumer drug advertising, voicing what many Americans are already thinking. In a poll conducted by STAT and Harvard School of Public Health last year, 57% of respondents said they supported a ban on drug commercials.

These commercials do more than just take up advertising air space. Big Pharma’s billion-dollar advertising budget can cause a host of problems, including high drug costs and adverse drug events.

The Evolution of Big Pharma Advertising

The following events were pivotal in shaping Big Pharma into the advertising giant that it is today.

The FDA permits consumer advertising to encourage price competition. Advertisements must include a brief summary of every known health risk of the medication. This requirement makes print the only feasible option for advertising since the health risks can be spread across multiple pages.

Boots Pharmaceuticals runs the first commercial for their ibuprofen, rufen. The company only advertises the price of the medication, believing that if it doesn't make any medical claims, it doesn't have to share the risks. But within 48 hours, the FDA orders them to pull the commercial.

A " target="_blank" rel="noopener">Claritin commercial exploits a regulations loophole by not specifying what the medication is for, instead telling viewers to ask their doctors for details. By doing so, they don’t have to list the drug’s risks.

Pressured by lobbyists and politicians, the FDA loosens advertising regulations by only requiring companies to share a medication's major health risks in advertisements. Companies can now direct consumers to another source (a phone number, website, etc.) for more information.

Nine out of ten pharmaceutical companies spend more money on advertising than they do on research and development.

From 2012 to 2016, spending on pharmaceutical drug advertisements increased by 62%—more than any other ad category over that time. In 2016, drug companies spent more than $6 billion on advertising.

This huge sum ultimately costs patients and impedes medical advances. Nine out of ten pharmaceutical companies spend more money on advertising than they do on research and development.

Though companies have to disclose the major risks in their ads, they don’t have to share data on the effectiveness of the medication or whether or not it is superior to a generic version. Drug companies heavily advertise their premium medications, often leading Americans to ask their doctors for expensive medications over generic versions.

"Looking at all the evidence about direct-to-consumer advertising, any reasonable person would support a ban on this dangerous form of marketing."

According to the FDA, generic medications cost 80 to 85% less than premium versions, and they meet the same safety and effectiveness standards set by the FDA.

"Looking at all the evidence about direct-to-consumer advertising, any reasonable person—acting independently of the pharmaceutical industry influence—would support a ban on this dangerous form of marketing. [This] would inevitably bring improvements in health and health system sustainability," Dr. Moynihan said.

In an FDA study, participants were less likely to remember the drug risks listed in a commercial if they were played alongside distracting visuals or music.

Drug companies are required to list the side effects of their medications in commercials, but whether or not viewers can remember that information is another story. There are no restrictions against using visuals, music, and other design elements to understate harmful risks.

In 2016, the FDA conducted a study on viewer distraction during drug commercials. The agency discovered that viewers were less likely to remember the drug risks if they were played alongside distracting visuals or music. Instead, what viewers often remember are the images of happy and healthy people and the drug's benefits.

In 2008, the FDA accused popular birth control YAZ of downplaying the risks of the contraceptive in their commercials. YAZ patients, the FDA reported, had a 74% increased risk of blood clots compared with patients on other oral contraceptives. The company was also accused of overstating the contraceptive's benefits by claiming it could help other conditions like acne.

The FDA sent YAZ manufacturer Bayer a warning letter in 2008 that said:

The[se] complex presentations distract from and make it difficult for viewers to process and comprehend the important risks being conveyed… The overall effect … is to undermine the communication of important risk information, minimizing these risks and misleadingly suggesting that YAZ is safer than has been demonstrated by substantial evidence or substantial clinical experience.

As part of a $20 million settlement with the FDA, Bayer aired a follow-up commercial that clarified the contraceptive was not approved for moderate acne or premenstrual syndrome.

Critics of direct-to-consumer drug advertising blame this increase on ads. "The information is designed to tell you what it is for and why you need it—but not if you need it," said Dr. Ameet Sarpatwari in an article for Harvard Men's Health Watch.

Thanks to the internet, American patients are now more empowered than ever, which can be a good thing. Educated patients may be more likely to seek medical attention for a condition, seek other medical opinions, etc. But without a medical degree, they lack a thorough understanding of a drug’s potential side effects or the exact symptoms of a rare medical condition that a doctor would know.

Big Pharma's “disease mongering,” critics argue, can exaggerate how frequently a rare medical condition occurs, or turn a natural condition (like aging) into a disease that requires a pill. These conditions often rely on vague symptoms for a diagnosis that can apply to lots of people, which ultimately helps companies sell more of the medication.

“If you want to stir up worry in the public, and you've got the advertising dollars to do it, you can turn almost anything into a disease.”

Arthur Caplan, a professor of Bioethics at the University of Pennsylvania, said in an interview for 60 Minutes, “If you want to stir up worry in the public, and you've got the advertising dollars to do it, you can turn almost anything into a disease.”

Critics point to the increased numbers of diagnoses for adult ADHD, social anxiety disorders, erectile dysfunction, and similar conditions as a byproduct of the pharmaceutical industry. While there are certainly people who genuinely suffer from these conditions, they are often much smaller in number than those who receive treatment.

"We seem to be living through the most extraordinary paradox: We have never been healthier, yet we seem to consider ourselves sicker and sicker than ever. Mild symptoms, inconvenience, being at low-risk, aging, human life, and death, are rapidly being medicalized,” said Dr. Ray Moynihan in an article for The Atlantic.

Only half of men with a prescription for testosterone therapy had been diagnosed with hypogonadism in the previous year.

Testosterone therapy offers the perfect case study for how dangerous misleading drug advertisements can be. Testosterone therapy drugs are intended to restore hormone levels in men who suffer from serious injuries or diseases like hypogonadism. But the ads tell a different story.

Testosterone ads, like that for AndroGel, position testosterone therapy as an anti-aging cure-all. The ads often ask men if they feel tired or not like they used to—common side effects of getting older.

This strategy has worked; sales for testosterone therapy increased by 69% between 2005 and 2011.

But the health risks of testosterone therapy may seriously outweigh the benefits, especially for men who shouldn't be using it. It has been linked to an increased risk of heart attack and stroke, and nearly 4,000 reports of serious complications.

A study published in JAMA Internal Medicine looked at ten years of androgen research and found that only half of those with a testosterone therapy prescription had been diagnosed with hypogonadism in the previous year. Similarly, the FDA found that 25% of men using testosterone therapy had never had their hormone levels tested, so there was no definitive way of knowing whether or not they needed the drug.

“The permissive guidelines [for prescribing testosterone] offered a ticket for drugmakers to just go full-bore with advertising campaigns,” Thomas Perls, a professor at Boston University, said in an article for Forbes.

Because of this spike in off-label prescriptions, the FDA demanded that testosterone therapy labels specify that they were only recommended for men with hypogonadism or other serious injuries.

One consequence of unnecessary prescriptions is a steep increase in adverse event reports.

The FDA is now considering a policy change to allow drug companies to advertise off-label uses, which would likely only cause the number of adverse events to increase.

Currently drug companies are only allowed to advertise the FDA-approved uses of a given drug or device. Doctors can prescribe a medication for off-label purposes, though, and a 2006 study reveals that this is the case for one out of every five prescriptions.

However successful direct-to-consumer drug advertising is, doctors are still the last line of patient defense. In many cases, though, this isn’t a hurdle for patients who want a particular medication.

Many doctors admit to prescribing drugs to patients if they ask for it—even if they think it’s unnecessary. A Medscape poll conducted last year found that 62% of doctors would prescribe an unnecessary drug if a patient demanded it.

Sixty-two percent of doctors would prescribe an unnecessary drug if a patient demanded it.

A 2005 JAMA study involving actors pretending to be patients saw this in action. In the first group, the patients reported classic depression symptoms that usually prompt further treatment. The second group expressed that they felt down after recently becoming unemployed—a state for which doctors would usually wait before prescribing an antidepressant.

One group of patients mentioned Paxil (an antidepressant), while the other group didn’t. Researchers found that doctors were more likely to schedule mental health appointments and prescribe antidepressants for the patients that mentioned Paxil, regardless of the severity of the symptoms they reported.

While doctors are supposed to have our interests at heart, they admit to worrying about retaining patients and avoiding lawsuits. But, even more dangerous are the number of doctors being paid by drug companies. ProPublica found that doctors who receive money from pharmaceutical companies are more likely to prescribe their drugs.

Until Big Pharma's advertising empire is reined in, patients must continue to be vigilant and question the information they receive from drug companies.

To find out if your medication has harmful side effects, check out our information on current drug lawsuits. If you or a loved one were harmed by a drug or medical device, reach out to our team of attorneys for a free, no-obligation legal review. We will help determine if you have a case against the manufacturer.