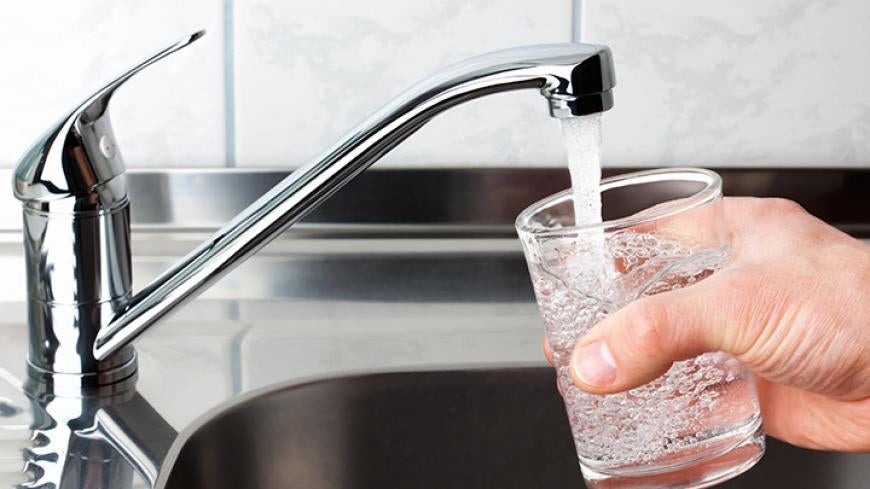 Have you had your daily dose of arsenic? If you live in 32 U.S. states, that may not be a far-fetched question. According to a database recently published by the Environmental Working Group (EWG), 365 public water utilities exceeded the legal limits for the substance in 2015.

There are 93 chemicals linked to cancer in America's tap water.

Nationwide, the EWG reports, there are 93 contaminants linked to cancer in our tap water.

The website also tells you if the contamination level in your water exceeds health guidelines—the concentration level at which scientists believe can cause harm—which are much lower than the standards federal authorities use. Based on scientific guidelines, more than 80% of water utilities nationwide contain dangerous levels of carcinogens in their drinking water.

Many of the contaminants that were detected are naturally occurring, but some, like herbicides and benzene, raise questions of the impact that agriculture and industrial polluters have on our water supply.

1.6 million Americans drink water that exceeds legal limits for TTHMs, chemicals that may cause blood cancer or skin cancer.

Disinfection by-products and arsenic are among the most common toxins that exceed legal limits in our water.

Disinfection by-products are created when disinfectants (like chlorine) react with naturally occurring minerals during water disinfection processes. This reaction creates Total Trihalomethanes (TTHMs) and Haloacetic Acids (HAA5), both of which may be harmful if consumed in large quantities.

Exposure to TTHMs and HAA5 may cause cancer or harm fetal growth and development. Yet, 1.6 million Americans drink water that exceeds federal regulations for TTHMs, and, 658,000 are left with water that exceeds legal limits for HAA5.

Tap water can also become contaminated with arsenic, which is naturally present in groundwater, as a result of agricultural practices and mining.

Arsenic poisoning can be deadly. Signs of poisoning include vomiting, abdominal pain, and diarrhea. Long-term complications can include heart disease, cancer, and harm to the central nervous system or brain.

According to the EWG’s data, 531,000 Americans have tap water that exceeds the legal limits for arsenic.

Regulations under the Safe Drinking Water Act may be misleading though, as the EWG and other scientists believe our health can be negatively affected by drinking much lower concentrations of these contaminants. Because of this, they created new safety benchmarks so consumers have a better understanding of the safety of their tap water.

Take arsenic, for example. According to the EWG’s benchmark, 70 million people have dangerous levels of arsenic in their water—a significantly higher number than what federal authorities report.

Other chemicals are even more concerning.

The EPA defines 1,4-dioxane, a contaminant that is present in 22% of cosmetic products, as a “likely carcinogen.”

There is still no legal limit for 1,4-dioxane. But according to EWG's guidelines, forty-six states have at least one water utility with alarming levels of 1,4-dioxane, affecting 90 million people.

Why the EPA Can’t Manage to Ban Known Carcinogens

For consumers who try to limit their exposure to pesticides and herbicides by purchasing organic food, there may be one source of exposure they are overlooking: Their drinking water.

The EPA identifies agriculture as the leading cause of water pollution. Runoff can pollute rivers, lakes, and water reservoirs with contaminants from fertilizers and pesticides.

Atrazine is the second-most applied herbicide in the U.S. The herbicide may cause cancer and hormone disruption, and even has the potential to change the sex of amphibians, as documented by U.C. Berkeley scientists. Nationwide, 7.6 million Americans have tap water that exceeds health guidelines for atrazine levels.

Roundup, or glyphosate, is even more widely used than atrazine. In addition to being linked to non-Hodgkin’s lymphoma, glyphosate is also connected to celiac disease, kidney damage, and it may even harm fetal growth.

As evidence piles up that further clouds glyphosate’s safety, three cities are left with glyphosate-contaminated water that surpass what scientists consider to be safe: Gilbert, Louisiana; Egan, Louisiana; and Polk City, Florida.

Agriculture isn’t the only source of water contamination. In 2015, U.S. industries and businesses dumped 191 million pounds of chemicals into rivers and streams, some of which supply our drinking water.

One of those chemicals is chromium-6, the chemical that Erin Brockovich famously fought a utility company over for water contamination in Hinkley, CA. The chemical is linked to cancer, liver damage, and may harm the reproductive system.

Every U.S. state has at least one utility that exceeds the safety recommendations established by scientists, altogether affecting 231 million Americans.

Any exposure to benzene can lower white blood cell counts, yet 32 water utilities exceed health guidelines for the chemical.

Surprisingly, we still lack federal regulations for chromium-6. And the only state that regulates it is California, though the legal limit there is 500 times higher than what scientists recommend, thanks to pressures from the chemical industry.

Another carcinogen that can be traced back to industrial pollution is benzene. The chemical is a particular public health concern for refinery workers and neighboring communities who may inhale the pollutant.

Benzene is linked to blood cancers like leukemia and non-Hodgkin’s lymphoma. Thirty-two water utilities exceed health guidelines for benzene concentration, which may be caused by petroleum spills or wastewater from refineries. But, the number of people affected by benzene could be much higher, as a National Cancer Institute study found that any exposure to benzene could lower white blood cell counts.

What Can You Do to Protect Your Health?

Familiarize yourself with what’s in your family’s tap water by entering your zip code in the tap water database.

Many contaminants can be filtered out by using a water filter. However, if there are chemicals in your water that exceed federal or health guidelines (the database will tell you), consider writing to your local officials.