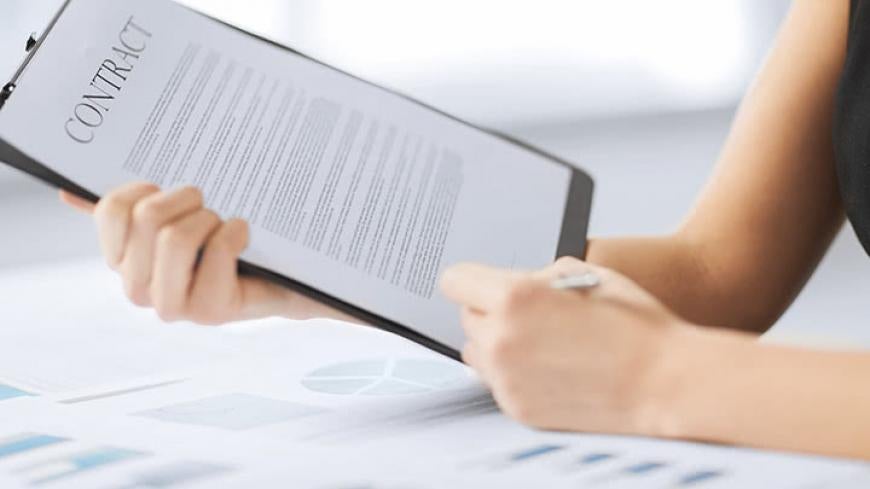 Arbitration clauses are buried deep within consumer and employer contracts, causing many Americans to unknowingly sign away their rights to a trial by jury.

Arbitration is changing the legal landscape, popping up everywhere from employer agreements to your favorite app’s terms of service. But what is it?

Arbitration agreements require that legal disputes are resolved in private arbitration, rather than in court. Arbitration does not involve a jury; instead, decisions are made by a third-party arbitrator or tribunal. The intent is that if decided outside of court, disputes will be resolved more efficiently.

Initially, arbitration was used between companies. But when employees and consumers were first presented with these agreements, an important shift happened: No longer were the terms agreed to voluntarily and knowingly, but often, without the knowledge of the other party.

These clauses are often buried deep within a contract and use confusing and dense terminology. As a result, many employees and consumers agree to them without understanding that they are signing away their rights to a trial by jury, including class action lawsuits. (Remember that “terms of service” box you clicked in a rush?)

A Timeline of Arbitration’s Rise in Popularity

Arbitration agreements have been around since the 1920’s. But, between 1985 and 2015, 14 Supreme Court decisions made arbitration an industry standard. Here are some key moments in its history.

1999: Meeting of the “Arbitration Coalition”

The Problems With Arbitration

In most cases, you are unable to opt out of arbitration agreements. You either agree to the terms and work for the company or purchase the particular product, or you do not.

In 2010, the National Employment Lawyers Association estimated that one-third of the nonunion workforce in America was forced to sign arbitration agreements.

They’re even more common in the financial sector: In 2016, PEW discovered that 70% of major banks had mandatory arbitration agreements, and 73% used class action waivers.

Though banks argue that their customers willingly signed their rights away, PEW found that 95% of respondents wanted the right to a trial in the event of a dispute with their bank.

James Young, an attorney for ClassAction.com, shared with us just how widespread arbitration has become.

“These clauses have enabled big businesses to force both customers and employees into a seemingly rigged arbitration system for almost every type of legal dispute: consumer fraud, unsafe products, employment discrimination, nonpayment of wages, and countless other state and federal laws intended to protect citizens against corporate wrongdoing.”

In some cases when individuals have refused to sign arbitration agreements, they were still prohibited from going to court.

Mother Jones reported that even though Fonza Luke refused to sign her employer's arbitration agreement, when she needed to file a workplace discrimination lawsuit she was told it had to be settled in arbitration. By showing up to work, her employer argued, she had agreed to their terms.

General Mills argued that if you “liked” the company on Facebook, you accepted their arbitration agreement.

A similar decision was made this year by the Sixth Circuit. Former University of Phoenix employees tried to form a class action lawsuit against the school, arguing that they never signed an arbitration agreement. Using Kentucky law, the court ruled that continued employment indicated acceptance of the employer’s terms.

This interpretation is found in consumer agreements as well. By purchasing a product, for example, you have agreed to a company's terms—whether or not you know what those terms are. In one extremely farfetched incident, General Mills argued that if you “liked” the company on Facebook, you accepted their arbitration agreement.

The most problematic aspect of forced arbitration is that it strips away the legal rights of employees and consumers.

"By inserting such clauses in every possible contract, businesses effectively moot the judicial system."

“Mandatory arbitration is a limitation on your right to seek relief,” said James Young. “By inserting such clauses in every possible contract, businesses effectively moot the judicial system. The result is anathema to the founding fathers' intentions as outlined in our Constitution.”

The Second Circuit recently protected the right to a trial by jury when they ruled that Uber could not force a class action lawsuit into arbitration. The small print of the app’s online agreement, they ruled, did not sufficiently warn customers they were waiving this right.

Explaining the verdict, U.S. District Judge Jed Rakoff said that a trial by jury “can be waived only if the waiver is knowing and voluntary.”

The importance of knowingly signing away your rights is currently playing out in many nursing homes. Facilities argue their patients consented to arbitration terms upon their arrival, but families argue their loved ones did not understand what they were signing. When families try to sue nursing homes for neglect or mistreatment, they find their legal rights barred.

The Centers for Medicare and Medicaid tried to stop this by passing a rule restricting arbitration agreements in nursing homes. However, this was blocked in November 2016 (within days of the rule taking effect) by a Mississippi federal judge.

By prohibiting class action lawsuits, employers are also at risk of violating labor laws. In particular, the National Labor Relations Act (NLRA) permits employees to organize against employers by forming unions or through collective action.

Employers often argue that the Federal Arbitration Act trumps the NLRA—an idea that many courts have sadly supported. As it stands, the legality of mandatory employee arbitration agreements depends on which judicial district is reviewing the case.

This inconsistency has necessitated Supreme Court review. Among the many cases awaiting trial is a case between the National Labor Relations Board (NLRB) and Murphy Oil USA.

The NLRB, which enforces labor laws, is appealing the Fifth Circuit Court of Appeals’ ruling that Murphy Oil can use mandatory arbitration agreements to prohibit their workers from filing class action lawsuits. They argue it violates the NLRA.

Arbitration Could Cover Up Corporate Wrongdoing

Arbitration and class action waivers are appealing to companies because they push legal disputes behind closed doors. But this is just what consumer and employee advocates are afraid of. Without the threat of publicized lawsuits, they argue that companies are more likely to do wrong, and consumers and employees may be less likely to come forward with their complaints if they believe they are the only victims.

The CFPB responded, and this past May proposed a rule that would ban financial institutions from using binding arbitration. They argued that class action lawsuits allow consumers a day in court, deter companies from illegal activity, and make a company’s actions more transparent to the public.

In June 2017, the CFPB issued a rule preventing banks and credit card companies from forcing customers to sign class action waivers, thereby robbing them of their day in court. CFPB Director Richard Cordray said, "Arbitration clauses in contracts for products like bank accounts and credit cards make it nearly impossible for people to take companies to court when things go wrong."

Consumer advocates and liberal Senators like Al Franken praised the move, while Republican lawmakers vowed to repeal the rule and reform (if not dismantle) the CFPB. In the meantime, the rule is scheduled to take effect in September 2017 and apply to contracts that begin in March 2018.

Wells Fargo provides a recent example of the necessity of the CFPB's rule and the importance of class action lawsuits. The bank was found guilty of widespread fraud for opening bank accounts and credit cards for customers without their permission. Customers left with damaged credit were told they could not file a class action lawsuit because they had agreed to arbitration when they first opened their accounts.

Employees and Consumers Are Less Likely to Win

Statistically, companies receive more favorable verdicts in arbitration than they do in court. This isn’t a huge surprise since companies select the arbitrator and establish the rules of the proceedings.

Companies also have the upper hand in consumer arbitration: Between 2010 and 2014, consumers only won one-third of complaints regarding fees, fraud, or costly loans.

“The process itself has been studied extensively and is empirically proven to result in better outcomes for companies and worse outcomes for consumers and employees,” said James Young. “Most plaintiff attorneys avoid practicing in arbitration proceedings due to the fundamental unfairness and the difficulty in making an honest living while practicing in that area.”

Smaller Disputes Are Too Costly to Fight

In addition to unfavorable odds, the cost of arbitration is enough to prevent employees and consumers from filing complaints altogether.

One of the benefits of class action lawsuits is that they provide more employees and consumers with access to the courts at a smaller expense. For disputes over smaller amounts of money (like a $30 hidden cell phone charge or $2,000 owed in overtime pay), they are particularly helpful. With this option removed, smaller crimes may be contested less.

The CFPB found that between 2010 and 2012, the average disputed amount in consumer arbitration across the financial industry was $16,000. An average of only eight cases a year were over disputes of $1,000 or less.

In the CFPB’s study, arbitration fees averaged $206 for consumers. However, in some cases, they can reach six figures.

This was the case for Stephanie Sutherland, who was told a dispute over overtime pay with Ernst & Young would cost her $200,000 in arbitration fees. The courts overrode Ernst & Young’s class-action waiver since the cost of arbitration would prevent her access to the courts. However, this was later reversed in the Court of Appeals.

The Future of Arbitration

Facing clogged courts, the judicial system frequently views arbitration as an efficient way to reduce the number of cases that go to trial. According to the New York Times, between 2010 and 2014, four out of five class action lawsuits were pushed into arbitration.

"Consumers and employees should expect continued expansion of arbitration as a way of limiting or reducing their rights."

James Young says the future of arbitration is depressing: “Passage of a federal arbitration fairness act seems highly unlikely in the current political climate. Consumers and employees should expect continued expansion of arbitration as a way of limiting or reducing their rights.”

Reform has been slow, but some progress has been made to prohibit arbitration in the workplace. In 2014, President Obama issued the Fair Pay and Safe Workplaces executive order, which rules that companies with federal contracts of $1 million or greater cannot require employees to sign arbitration agreements.

Several attempts have been made to take this further by protecting every American worker. The Arbitration Fairness Act has seen many iterations, most recently in 2015. The act, spearheaded by Senator Al Franken (D—MN), would protect all workers from forced arbitration.

“It may take a while until thoughtful people realize that there is actually so much at stake here.”

In an " target="_blank" rel="noopener noreferrer">Emory School of Law panel, Professor Myriam Gilles said the way forward is to continue to  “regulate, legislate, and innovate.”

“It may take a while until thoughtful people realize that there is actually so much at stake here.”

Have your legal rights been violated?