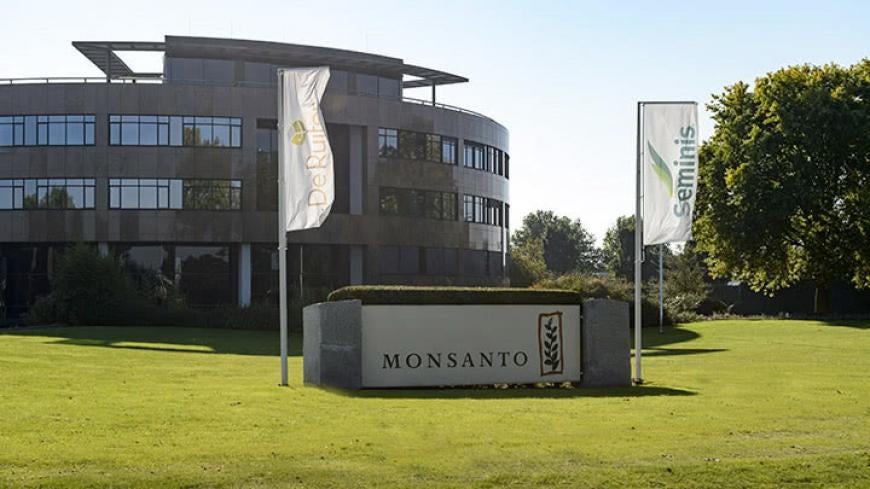 Combined with Monsanto, Bayer would control a quarter of the world's seeds and pesticides, potentially affecting the world’s food supply, ecosystem, and supermarket prices.

A merger between Monsanto (the company behind GMOs and the herbicide Roundup) and Bayer (the pharmaceutical company that manufacturers pesticides and seeds under Bayer CropScience) is gathering momentum. Earlier this week, Monsanto shareholders approved Bayer’s $66 billion offer to acquire the company: the largest all-cash offer in history.

What makes this potential merger so important—and scary—is just how powerful it would make Bayer. Combined with Monsanto, they would control a quarter of the seeds and pesticides market worldwide, potentially affecting the world’s food supply, ecosystem, and supermarket prices.

Small farmers, consumers, scientists, and politicians alike hope that the merger will be rejected by antitrust regulators. But with shareholders on board and a new administration on the horizon, the merger may be approved.

If the merger is approved, Bayer would own 29% of seeds and 28% of pesticides worldwide. The sheer size of the new company, combined with the similarity of Monsanto and Bayer's businesses, raises antitrust red flags.

The century-old Sherman Antitrust Act and Clayton Antitrust Act help prevent mergers and acquisitions of this size. Primarily, regulators are concerned about reduced competition which can inhibit innovation, result in price fixing, and leave consumers and employees vulnerable to abusive business practices.

As a preventative measure, large mergers and acquisitions must be reviewed by the Federal Trade Commission and the Department of Justice. This is where Bayer may stumble. The current administration has strictly opposed large mergers, like Staples and Office Depot, among others.

But Bayer may benefit from a change in administration. The company is so optimistic that it promised Monsanto shareholders a $2 billion termination fee if blocked.

"A Marriage Made in Hell"

If approved, environmental experts warn the merger would be a “marriage made in hell.” After examining the harmful track record of their products, this description may not be far off.

Monsanto is known for a long list of dangerous and controversial biotechnology, including Agent Orange, PCBs, GMOs, and the carcinogenic pesticide RoundUp.

Like Monsanto, Bayer also has a line of genetically engineered (GE) seeds and herbicides and pesticides. Most dangerous are Bayer's neonicotinoids—pesticides that are the primary cause of the destruction of bee colonies.

Bayer argues that acquiring Monsanto will help the company better address greater demands on the world’s food supply, primarily by selling GE seeds. GE seed cells are modified so that they are resistant to the powerful herbicides and insecticides Monsanto and Bayer sell. By planting GE crops, the companies argue, farmers are able to produce greater crop yields and decrease the overall amount of herbicides and pesticides they spray.

What does a Bayer-Monsanto merger mean for the average farmer and consumer? Farmers will first notice higher seed prices and few non-GE alternatives—a cost eventually felt by consumers in the supermarket.

GE seeds are particularly pricey because they are registered as intellectual property. This prevents farmers from reusing their seeds, a millennia-old farming practice.

Corn and soy seed prices have increased more than 300 percent since 1995.

Farmers looking for alternatives to genetically engineered seeds are having a harder time finding them. Charles Benbrook, a research professor at Washington State University, found that between 2000 and 2010, non-GE corn seed varieties decreased by 67 percent. Similar trends were found for other plants, including sugar beets, for which Monsanto owns 95% of the seeds.

More Herbicide Will Be Sprayed

In addition to pricier seeds, farmers are also faced with having to spend more on the seeds’ accompanying herbicides.

After years of spraying, weeds eventually adapt to the herbicides and become resistant to it. This leaves farmers with "super weeds," requiring them to spray greater quantities of stronger chemicals.

A study by The New York Times found that since genetically engineered seeds were introduced, herbicide use increased by one-fifth in the U.S. and Canada—countries reliant on GE seeds. In France, a country that is GMO-free, herbicide usage dropped by one-third.

Aside from the costs to farmers, higher quantities of herbicides is also bad news for the health of consumers and the environment. Monsanto’s Roundup is a carcinogen that puts farmers and gardeners that use the spray at a greater risk of developing non-Hodgkin’s lymphoma.

A Potential Disaster for Bees and Biodiversity

Bayer and Monsanto argue that their merger would help to feed a growing world population, but it may actually lead to more food shortages.

The New York Times discovered that over GMOs' 20-year history, they have not resulted in an increased food supply. What Monsanto and Bayer have managed to do, though, is severely damage the ecosystem—a trend that is likely to result in major food crises in the future.

Pesticides like Bayer's neonicotinoids have decimated the world’s populations of natural pollinators. Ninety percent of the monarch butterfly population has died over the last 20 years, and between 2006 and 2012, the USDA reported that 10 million beehives were lost.

Environmental experts estimate that the work of pollinators equates to $15 billion in agricultural labor. Because of the severity of the crisis, the EPA is  taking steps to regulate neonicotinoids.

But Bayer's pesticides aren't the only threat to the environment. By using identical genetically modified seeds, companies like Bayer and Monsanto destroy biological diversity. Biodiversity is important because it helps reduce the spread of crop diseases. If every crop has the same genetic makeup, a disease has the potential to wipe out a huge portion of our food supply.

Giving so much control to one company—especially one that is hurting farmers, the ecosystem, and our health—may spell disaster for our food supply.

Were you diagnosed with cancer after using Monsanto's Roundup?