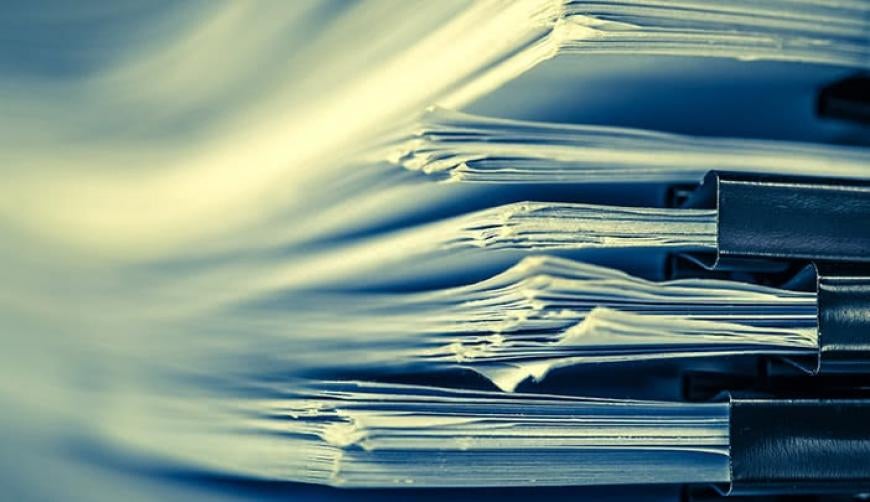 Tucked away in an Oregon barn for decades was a collection of internal documents, correspondence, and chemical safety studies detailing the lengths the chemical industry took to conceal the dangers of their products.

The documents in this collection—dubbed the “Poison Papers”—allege fraudulent chemical safety testing, corporate concealment of chemical dangers, and collusion between the industry and the regulators who were supposed to be protecting the public and environment. Commonly used herbicides like Roundup (glyphosate), dicamba, atrazine, and 2,4-D feature prominently among the papers, as do nearly every large chemical corporation.

Now, thanks to the combined efforts of the Center for Media and Democracy (CMD) and the Bioscience Resource Project (BRP), this collection is available online for the first time.

We spoke with Lisa Graves, CMD's executive director, about what the collection reveals and how we're still feeling the effects from improper chemical approvals from decades past.

What are the Poison Papers? What kinds of documents are in the collection and how did this project come about?

We launched PoisonPapers.org this summer as a project of the Bioscience Resource Project and the Center for Media and Democracy.

The Poison Papers are the digitization of about three tons of files from litigation against Monsanto, litigation involving some of the Dow Chemicals products, open records requests, and Freedom of Information Act requests to the federal government as well as state agencies. It represents documents that were discovered over the past 40 years but some of the documents, including scientific studies, are older than that because they are from litigation.

What they reveal is just the exceptional level of involvement of these big chemical companies in trying to limit public protections against their chemicals. They show in some instances collusions with government officials. There’s some very telling episodes from the Reagan administration with his EPA working hand in glove with companies to try to limit the limits so to speak on products.

"What they reveal is just the exceptional level of involvement of these big chemical companies in trying to limit public protections against their chemicals."

And there’s an array of documents from studies that show harms by a number of chemicals, including PCBs, dioxins, and more. What we’re left with is a situation in which many of these chemicals remain on the market, are in products that are being used by consumers and by government agencies, and continue to pose a risk to human health and to the health of our ecosystem.

One of the reasons why we were so eager to get these materials more broadly out into the public realm is because there’s sort of this pre-Google, post-Google world we live in. If it’s not Google-able, many people can’t find the information.

In this instance, these materials were in the barn of one of the leading activists on these issues, Carol Van Strum, who really spearheaded a lot of the work to drag into light what was happening in terms of spraying of forests and fields with these poisons. The materials in the barn were spoiling so we were concerned that they may not survive if they weren’t digitized.

The collection includes information on the Industrial Bio-Test Laboratories scandal. What was that? How are we still feeling the effects of the scandal?

"The IBT scandal...involved more than 800 studies on more than 140 chemicals by 38 chemical manufacturers. Those studies were either non-existent, fraudulent, or invalid."

One of the historical tales told by the documents is this testing scandal. It turns out that a substantial number of the tests that were used to justify allowing chemicals to be sold in the U.S. were based on false or fake test results. But one of the things that is apparent from the documents is that in many instances some of the chemicals were not subject to other testing in the face of the scandal.

When there are rigged tests that basically allow certain chemicals to enter the marketplace (and not just in the U.S. but globally), that has a longstanding impact on human health. If the chemicals weren’t properly tested in the first instance and then weren’t really subject to truly independent testing subsequently, how can you trust the determination that certain products were safe or are safe?

Even though the IBT scandal was in the late 1970’s, it involved more than 800 studies on more than 140 chemicals by 38 chemical manufacturers. Those studies were either non-existent, fraudulent, or invalid. What the documents show is how the EPA in the 1980’s colluded in our view with the pesticide manufacturers to keep invalidly registered products on the market and basically helped cover up the problems with many of those chemical tests.

Why the EPA Can’t Manage to Ban Known Carcinogens

In the U.S., manipulation of these agencies has basically allowed the corporations to select the testers, what’s tested, what’s not tested, and sort of make their case to the agencies that are regulating those chemicals. In many instances those agencies are too often staffed by former industry officials, whether they are political appointees or whether they are burrowed in employees. Too often those agencies are I think allowing chemicals to be used based on what amounts to attestations by the companies or the firms hired by the companies to say that the products are safe.

Since you launched the collection have you heard anything from corporations trying to downplay or discredit the documents?

The documents are plainly historical documents—you can see for yourself if you go to the library. You can see the markings on them from litigation and the clips from newspapers. Carol Van Strum was meticulous in collecting information about what Monsanto was up to and we certainly trust her files far more than whatever assertions Monsanto PR flacks are making.

I’m not surprised. That’s been their strategy for a while: To deny.

Yeah, deny, deny, deny. But we stand by the documents and we think that they’re important for the public to know.

This is an industry that has a well-documented history—and certainly Monsanto has a well-documented history—of scandals and serious problems with products, so we’ll see what happens next. But we think the public has a right to know the information in these materials and we are very grateful for the activists who spent decades collecting them through their own litigation and efforts to try to shine a light on these issues.

There are a number of companies whose documents, materials, or positions are referenced in these files. You can do a search by name of the company or by the name of the chemical and find all of the papers that reference that chemical, product, or corporation.

You can see documents about how dioxins were in human breast milk after certain chemicals like 2,4-D were applied to forestlands under the management of the U.S. Forest Service and the Bureau of Land Management (BLM). There are a number of tests that show how some of these chemicals impact reproductive capacity of animals, including the shrinkage of gonads. If that’s true, what is the impact on human health if these chemicals bioaccumulate in human fat or accumulate in our food supply system?

These are serious issues raised by these materials about chemicals that have been applied and applied over many years in our agricultural communities and in people’s own backyards.

You’ve already raised a few disturbing points, but was there anything else that shocked you when you went through the collection for the first time?

We actually did a project a couple of years ago on atrazine, which is a chemical that is marketed in part by Syngenta. We created an atrazine exposed site to make sure the public could see documents from atrazine litigation. Some show a high level of contamination of water supplies where atrazine was applied, for instance in corn fields.

A scientist out at the University of California Berkeley was basically attacked by the industry for his scientific study—his independent, not corporate analysis—of the potential impacts of this herbicide on frogs, which is significant for impacts on human health. When you look at atrazine what you see is an impact not just on animals but also on plants and the ecosystem.

A number of these chemicals are still subject to litigation by lawyers who are trying to protect the health of their clients, whose clients suspect or are concerned that the evidence indicates that they have been harmed or their children have been harmed by these products. It is certainly the case that lawyers may have access to things that have been filed in the public records, but with the atrazine exposed project and this Poison Papers project, we’re making sure the documents that may be known to only a few attorneys, a few litigants, or a few concerned citizens are available as widely as possible to the press and public.

Have you found that the public is more interested in what’s happening because of these projects?

Yeah. Certainly after the articles that broke the story about the Poison Papers, including from The Intercept and The Guardian, we’ve had a number of inquiries from reporters about the materials and the stories they tell.

We cannot tell all the stories or even most of the stories that are in there. The public service that we are trying to provide is to make the documents available for anyone to explore and reveal those stories and connect the dots to the current battles, especially with Scott Pruitt at the helm of EPA and their efforts to basically roll back virtually anything they can get their hands on.

We’re at a point in U.S. history where there is an assault on regulation. But in many instances these regulations, which they are trying to use as a dirty word, are actually about protecting our health, our water, our air, and our food supply. Yet this administration has shown that it is more than happy to do the bidding of the industry and the corporations that want to minimize protections. Many of these companies are the very companies that are involved in these documents that have fought over time to sell their products without restrictions and have tried to change public policy so that it serves their private interests rather than the broader public interests.

It’s great that the public can access these documents and become empowered.

"This moment is a moment in which we’re witnessing so much extraordinary influence by corporations on our democracy, and not in a good way."

My hope is that ultimately as people learn more about what’s happening, in terms of the efforts to basically give away the store to these chemical companies, that people will respond and that the movement to protect our health and our planet will grow even stronger. I hope that there will be opportunities in the future to not just restore protections, but also, since some of those protections were I think inadequate, to really make stronger protections for our health and our environment.

This moment is a moment in which we’re witnessing so much extraordinary influence by corporations on our democracy, and not in a good way. But I think there is a growing movement of people—there are certainly a number of lawyers out there who have been working hard over the years to try to protect people’s rights and our environment. My hope is that together we can all be more informed and push back this corporate distortion of our democracy that these documents in many ways reveal.