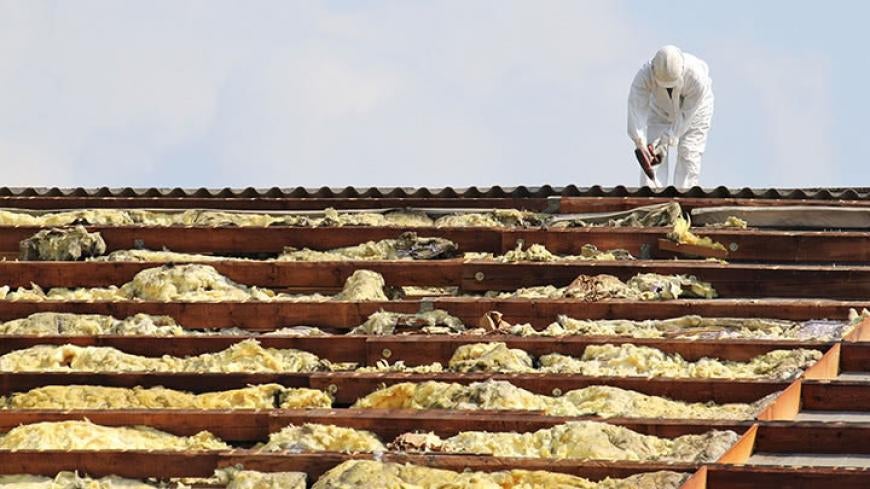 Asbestos workers often carried the carcinogen into their homes via their clothing, hair, or skin, putting entire households at risk of developing mesothelioma.

Mesothelioma, the deadly cancer caused by asbestos exposure, causes thousands of deaths each year. But not every diagnosis is caused by direct exposure at a work site.

Long before OSHA safety standards and EPA regulations, workers commonly left their jobs still covered head-to-toe in asbestos dust, carrying the carcinogen into their homes and exposing their family members to the harmful mineral.

Without protective equipment, any exposure to asbestos is unsafe. Just by inhaling asbestos dust left on work boots or coveralls, family members could contract mesothelioma.

In fact, the American Cancer Society warns that asbestos fibers tracked into the home pose an increased cancer risk for family members: "There is no clear safe level of asbestos exposure in terms of mesothelioma risk," they warn.

Former asbestos manufacturers and employers who used asbestos products have paid millions for knowingly exposing workers to the carcinogen. But, as courts are ruling more and more, they can be just as responsible for the mesothelioma diagnoses of family members, even if they were harmed away from a worksite.

Asbestos fibers are extremely dangerous when inhaled or swallowed because they can stick to the mucus-lining of the lungs or abdomen. There, the fibers can slowly develop into cancer, often taking decades until symptoms emerge.

To reduce the risk of exposing their households to mesothelioma, it's vital that asbestos workers wear separate protective clothing when working with the carcinogen, and shower to remove any lingering asbestos dust before leaving work sites. Today, companies are required by law to eliminate risks of exposure to asbestos for employees and anyone else they come into contact with.

OSHA’s asbestos safety standards (last revised in 2002) are detailed. For Class I workers (or the most dangerous levels of exposure), employers are responsible for providing the following rooms for employees to enter and exit the work site:

Half of Female Mesothelioma Cases Caused By Exposure at Home

Washing asbestos-coated clothing is a common cause of "bystander" mesothelioma.

Sadly though, most companies failed to exercise safety precautions before EPA regulations were adopted in the 1970s, causing spouses, children, and other household members to develop mesothelioma later in life.

Bystander or "take-home" asbestos exposure particularly affects women. Two different studies—one conducted in 1997 by Durham and Duke University Medical Centers and another conducted in Denmark between 1996 and 2012, published in the Danish Medical Journal—discovered that more than half of women diagnosed with mesothelioma contracted the disease at home.

New Jersey made one of the first landmark decisions recognizing take-home asbestos exposure. In 2006, the state ruled in Olivo v. Owens-Illionois Inc. that Exxon owed “duty of care” to spouses exposed to asbestos dust on the clothing of employees.

Last December, the California Superior Court unanimously extended employers’ “duty of care” to protect not only spouses from harm, but family members, roommates, and others who come into regular contact with asbestos fibers brought into a home.

California Justice Goodwin Liu said, “Where it is reasonably foreseeable that workers, their clothing or personal effects will act as vectors carrying asbestos from the premises to household members, employers have a duty to take reasonable care to prevent this means of transmission.”

Secondhand asbestos cases aren’t just being recognized by courts, they are also resulting in large awards for families who lost loved ones to the disease.

Melissa Ann Bobo filed a lawsuit against the Tennessee Valley Authority (TVA) in 2012 after contracting pleural mesothelioma (mesothelioma of the chest). Her husband worked at the TVA-operated Browns Ferry Nuclear Power Plant in Alabama where he was exposed to asbestos.

Ms. Bobo washed her husband’s clothes twice a week for 22 years, continually exposing herself to the carcinogen. She eventually died from the disease in September 2013, two years before winning a $3.5 million award from an Alabama federal judge.

In a similar case in Washington, Barbara Brandes filed a lawsuit in August 2014 against Brand Insulation. She was diagnosed with mesothelioma after washing her husband’s work clothes, which were often covered in asbestos dust from his job working at a refinery in Puget Sound.

The following year, both Ms. Brandes and her husband passed away from mesothelioma—Barbara just one day before the closing arguments. Her case resulted in a $3.5 million award.

Companies knew for decades that asbestos was a carcinogen, yet they continued to expose employees (and their families) to the dangerous mineral.

If you or a loved one were diagnosed with mesothelioma, you may be eligible for a lawsuit. Contact our legal team for a free, no-obligation case review. It costs nothing unless we win a jury award or settlement.