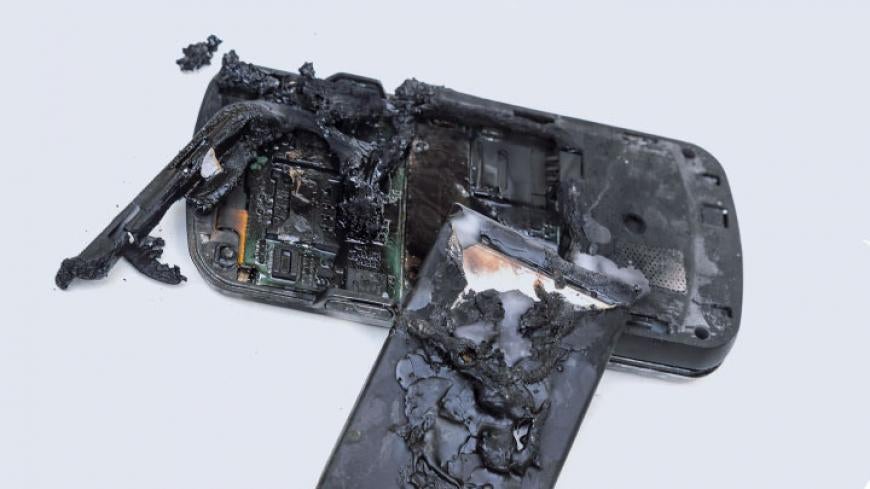 Nearly all of our rechargeable electronic devices are powered by lithium-ion batteries—the same batteries that cause e-cigarettes to explode and hoverboards to burst into flames.

Manufacturers continue to rely on these volatile power sources because their energy density is unparalleled—more than double that of household alkaline or NiCD rechargeable batteries. The injuries and property damage that have resulted from lithium-ion battery explosions though raise serious questions about what companies are doing to ensure their products are as safe as possible.

What are Lithium-Ion Batteries?

Lithium-ion (Li-ion) batteries have been around since the 1970's. But despite their age, they have become more dangerous, not less, as demand for slimmer electronics with longer-lasting batteries increases.

Li-ion batteries have four main components: positively-charged cathodes, negatively-charged anodes, a highly flammable liquid electrolyte, and a thin sheet of polypropylene that separates the cathodes from the anodes.

When a li-ion battery is charging, electricity moves from the cathodes through the porous polypropylene separator and the liquid electrolyte to the anodes. The reverse process happens when a device discharges.

Why Do Lithium-Ion Batteries Explode?

“These aren’t the batteries you grew up with."

Problems with lithium-ion batteries start when the opposing electrodes, the cathodes and anodes, touch. The thin layer of polypropylene that serves as the battery separator is supposed to prevent this from happening, but it’s a difficult job as devices become slimmer and batteries stronger.

When the cathodes and anodes do touch, the battery may short circuit, leading to thermal runaway. Thermal runaway is a chemical chain reaction that causes battery chemicals to quickly heat up, sometimes reaching temperatures hotter than 1,000° F. With temperatures that high and the intense pressure that comes along with it, the flammable liquid electrolyte is likely to combust.

But what exactly causes the battery to short circuit in the first place? There are a few common causes:

“These aren’t the batteries you grew up with—they’re not like alkaline batteries,” warns Mike Morgan, managing partner of Morgan & Morgan’s Product Safety Group. “They shouldn’t be sold loose to consumers without proper training. Instead, they should be sold as ‘captured batteries’ that are protected and allow for safer use. You shouldn’t have to have a degree in electrical engineering to safely operate these devices.”

Yet, these batteries are everywhere and in everything, electrical engineering degrees notwithstanding.

Which Electronic Devices Are Susceptible to Overheating?

Lithium-ion batteries aren’t just different from alkaline batteries for their complex design; they also differ from the average household batteries in that they are more likely to overheat and explode.

It doesn’t matter how large or small the battery is, nor what device it’s powering or the product manufacturer. These batteries can explode anywhere and at any time; while charging, in use, or even while lying dormant.

Remote controls, wireless ear buds, children's toys, and even baby monitors have all been known to catch fire unexpectedly. Here’s a roundup of the most notable li-ion battery explosions and recalls.

Laptops were among the first electronic devices to catch fire because of overheating li-ion batteries. In 2006, Dell recalled more than four million laptops. But, overheating laptops are nowhere near a thing of the past for the company. In 2017, a camera captured a teen’s Dell laptop as it burst into flames while charging in his living room.

Dell isn’t the only company that has problems with their laptop batteries. At the beginning of 2018, HP recalled 50,000 laptops because of their susceptibility to overheat. Before the recall was announced, the U.S. Consumer Product Safety Commission (CPSC) had received eight reports of batteries overheating, melting or charring, causing both property damage and first-degree burns.

“The batteries, when unstable, can pack the punch of a roman-candle grenade.”

E-cigs, or vape pens, can cause devastating injuries if they explode since they are used so close to the face and mouth.

When former professional soccer player Danny Califf’s vape pen exploded in his face in 2016,  the li-ion battery when through his cheek. He suffered a broken cheekbone and a concussion as a result.

Other vape pen explosions have ripped holes near people’s mouths, blinded eyes, caused second and third-degree burns, and even set cars on fire. From 2009 to January 2016, the FDA received 134 reports of vape fires and explosions.

“The batteries, when unstable, can pack the punch of a roman-candle grenade,” said Mike Morgan. “When you put the battery in a steel tube like a vaporizer, it builds up with such pressure that you effectively have a pipe bomb. You’re taking that and putting it in your mouth and your pocket, and walking around every day with it.”

It wasn't long before this must-have holiday gift ranked as one of the most dangerous toys.

Hoverboards rely on powerful li-ion batteries that pack a dangerous punch when they explode. More than half a million hoverboards were recalled in 2016 after a string of fires and explosions.

These self-balancing scooters have caught fire while charging, riding, and sometimes when they are not in use at all.

A family in Louisiana tragically lost their home when a charging Fit Turbo hoverboard exploded. The fire spread so quickly that their teenage daughter had to jump out of a second-floor window to safety.

The CPSC reported that they received 99 reports of hoverboards “overheating, sparking, smoking, catching fire and/or exploding.” These incidents resulted in more than $2 million in property damage.

Samsung phones were so prone to exploding that they were eventually banned from airplanes. The phones weren’t manufactured with enough space between the battery’s separator and the electrodes, causing the cathodes and anodes to come in contact. Samsung was eventually forced to recall the Note 7. Overall, there were 92 cases of Galaxy Note fires, 26 burns, and 55 incidents of property damage.

But soon after the first Note 7’s exploded, it was clear that the problem was occurring in other Samsung models, like the S7 Edge.

An S7 Edge exploded in the pocket of Daniel Ramirez while he was on a job site in Ohio. The explosion caused second and third-degree burns on his leg, groin, and lower back. ClassAction.com is representing Daniel Ramirez in a lawsuit against Samsung.

Can I File a Lawsuit If My Electronic Device Caught Fire?

While lithium-ion batteries are a problem industry wide, it doesn't mean that manufacturers are off the hook when it comes to product safety.

Consumers who have suffered physical harm or property damage after an electronic device caught fire may be eligible for compensation. Lawsuits filed against product manufacturers usually allege some combination of the following:

If your electronic device caught fire unexpectedly, contact us today for a free, no-obligation legal review. Our attorneys have filed lawsuits against Samsung and e-cig manufacturers and have the  experience to hold companies accountable for the harm they may have caused.