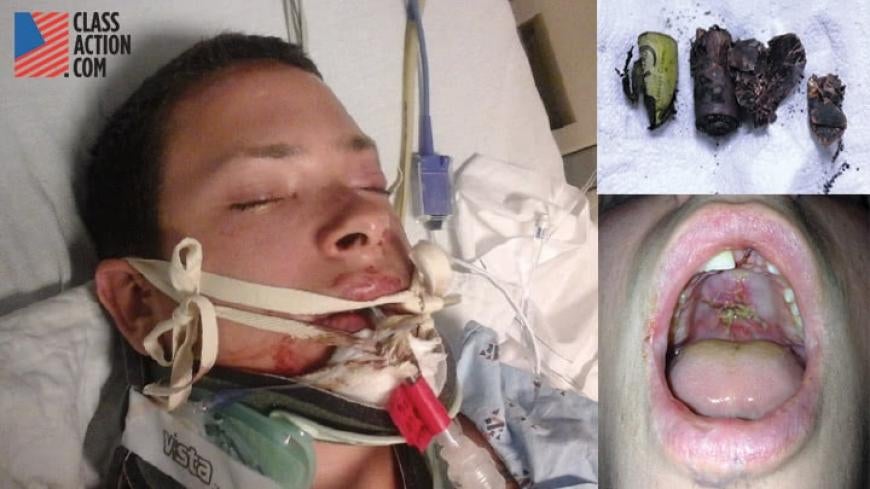 Around 11am on July 29, 2015, James Lauria was taking a vape break from his job as a concierge at the Beach House, a Wyndham Resort in Destin, Florida. Without warning, the e-cigarette in his mouth exploded, blasting a large hole between the roof of his mouth and his naval cavity and fracturing his teeth and hand, among other injuries.

ClassAction.com attorneys have filed a lawsuit against the manufacturers who made Mr. Lauria’s e-cigarette and the retailers who sold it to him.

Mr. Lauria had to be intubated because his esophagus was so swollen that he couldn’t breathe on his own. He was airlifted across state lines to the University of Alabama at Birmingham’s (UAB) trauma and burn unit, where he was treated for extensive injuries.

Our attorneys have filed a lawsuit against the manufacturers who made Mr. Lauria’s e-cigarette and the retailers who sold it to him. We have also filed two other lawsuits on behalf of Florida residents injured by e-cigarette blasts. You can read the complaints here:

These lawsuits seek damages for pain and suffering, mental anguish, hospital/medical bills, and lost wages (past and future).

Like millions of Americans, Mr. Lauria took up vaping so that he might be able to quit smoking and protect his health. It is tragically ironic, then, that an e-cigarette wound up causing him such terrible pain and suffering.

According to Mr. Lauria’s complaint, the e-cig explosion “caused extensive damage” to him,

including but not limited to puncturing the palette in the roof of his mouth leaving a gaping hole all the way through to his nasal cavity, jamming teeth through his gum, fracturing teeth, burning his left hand which was holding the vaporizer, fracturing his hand and his C-5 vertebrae, burning the left side of his face and chest area, and scratching his left eye from flying debris from the explosion.

In the case of another plaintiff, William Pickett, an e-cigarette exploded in his pocket as he drove to work, “engulfing [his] leg in flames.” Mr. Pickett says he suffered second and third degree burns.

In another case, Florida man David Studer was injured when an e-cigarette battery exploded in his shorts pocket, catching them on fire. Mr. Studer’s complaint says he suffered second and third degree burns on his thigh.

While the specifics of each lawsuit vary, they all have one thing in common: an e-cigarette exploded, seriously injuring someone who had no reason to expect and no way to protect against such a traumatic incident.

Attorney Mike Morgan said, “The scary part about the e-cigarettes is that most of the devices and their components are made in China. The batteries we see exploding are cheaply made or simply re-wrapped lithium ion batteries.”

Mr. Morgan added, “Many of the devices lack proper ventilation, turning the device into a pipe bomb where heat discharged from the battery builds up in the e-cig until the pressure is so great that it explodes.”

But our clients’ experiences are not isolated incidents: there have been dozens such explosions. There were at least 25 e-cig explosions between 2009 and 2014, at least a dozen more in 2015, and there have already been dozens more in 2016. According to The Wall Street Journal, the FDA received 134 reports of vape-related fires and explosions from 2009 to January 2016.

Earlier this month, footage of an e-cigarette exploding in a French man’s pocket went viral online. The man, Amine Britel, said he suffered second degree burns and that his jacket melted around his finger when he tried to extinguish the fire.

As noted by Mr. Morgan, these are the same kinds of volatile batteries that have plagued hoverboards and Samsung Galaxy phones. “As we saw in the Samsung debacle, these batteries are very sensitive and the smallest mistake can lead to disastrous consequences.”

In fact, one of the defendants in Mr. Pickett’s case is Samsung, which allegedly manufactured the exploding battery.

E-cigarette batteries are so volatile (and their ingredients so toxic) that earlier this year the FDA began regulating the vaping industry. The agency hopes that, by taking a closer look at what is going into these devices, it can curb calamities such as Mr. Lauria’s.

The myriad explosions and other health hazards associated with vaping have generated a flood of e-cigarette lawsuits against manufacturers and retailers.

Our attorneys are now pursuing lawsuits against e-cigarette companies in the hope that we can combat this rising public health crisis. Through legal action, we will obtain relief for these victims and hold e-cig companies accountable for their negligence.

If you or a loved one has been injured by e-cigarettes, please contact us immediately for a free consultation. Don’t hesitate; these cases are time-sensitive, and you may be owed money.

Were you injured by an exploding e-cigarette or e-cig battery?