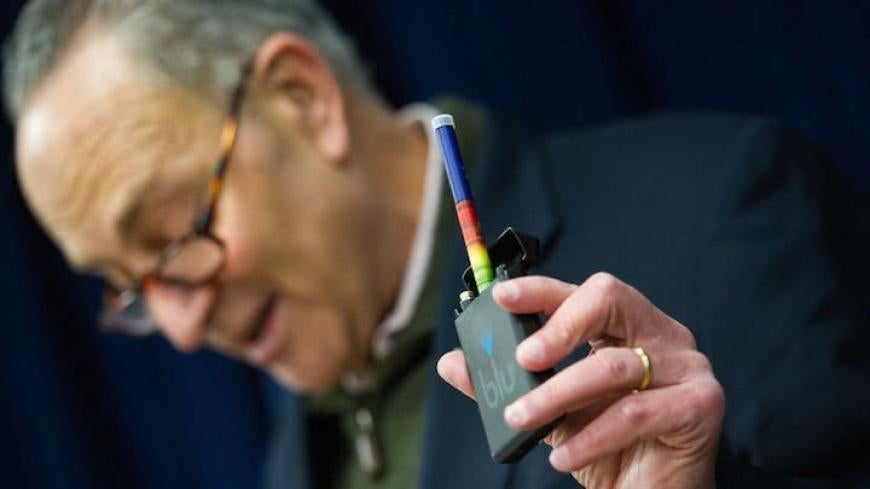 Citing a flurry of recent e-cigarette explosions, a lack of research, and the generally poor safety record of products manufactured in China, incoming Senate minority leader Charles Schumer (D-NY) has called on the U.S. Food and Drug Administration (FDA) to subject the e-cig industry to greater scrutiny and regulation.

In a blistering statement, the current Senate Majority Leader (soon-to-be Senate Minority Leader) noted that despite several nasty e-cigarette explosions in recent months, not one e-cig or vape product has been recalled. He called for more recalls and intensive research into the $10 billion industry.

“They’ve got to get moving. We’ve had a recent rash of explosions here in New York and elsewhere,” Senator Schumer said. “If there is a pattern of brands, the public should know it right away and they should recall some brands, those that are particularly susceptible to exploding.”

Senator Schumer called the current e-cig landscape a “huff, puff, explode” situation and said that, according to the FDA, there were at least 92 incidents of e-cigarettes catching fire or exploding between 2009 and 2015. (The actual number may be much higher, as not every incident is reported to the FDA.) He also noted that most e-cig batteries are made in China, which Schumer says has a poor safety record in terms of its exports to the U.S.

Recently, two high-profile eruptions in Sen. Schumer’s home state of New York have cast the industry in an unflattering light. Earlier this month an emergency medical technician (EMT) in the Bronx suffered second-degree burns when his e-cigarette exploded in his pocket.

Around Thanksgiving, a wine store employee at Grand Central Station had an e-cig blow up in his pocket, the video of which went viral.

But the most infamous incident might be that of Leor Domatov, the 14-year-old boy who was partially blinded by a vape explosion at the Kings Plaza Mall in Brooklyn. Domatov spent five days in the hospital, where, according to Gothamist, “he was treated for cuts to his eyes, chemical burns, and injuries to his hands.”

In neighboring New Jersey, which has also been burned by e-cig blasts, at least four lawsuits have been filed against manufacturers and retailers. Gregory and Stacey Burdash of Berlin, NJ filed a lawsuit after Mr. Burdash alleged that an e-cig battery exploded in his pocket on September 29, 2016.

"I have not been able to return to work, and as the sole breadwinner in the family, it hurts you mentally and physically."

"I have had incredible pain since then. I have not been able to return to work, and as the sole breadwinner in the family, it hurts you mentally and physically," Mr. Burdash said.

William D. Gant of Cumberland County claims that he experienced an e-cig explosion in March 2015 that caused him to suffer third-degree burns on his lower extremities. Mr. Gant alleges that his injured foot will require a skin graft.

Two unidentified teens in New Jersey have also filed lawsuits over alleged vape explosions. One says she needed plastic surgery to correct serious injuries to her lips and mouth and that she will need bone grafts for her jaw. The other teen alleges burns to his arms and torso that cause him “unbearable” pain.

Earlier this year, ClassAction.com filed several e-cig lawsuits against manufacturers and retailers over similar incidents that allegedly occurred in Florida. These complaints seek damages for pain and suffering, mental anguish, medical bills, and lost wages (past and future).

If you or a loved one has been injured by e-cigarettes, please contact us for a free case review. Don’t wait; these cases are time-sensitive, and you may be entitled to compensation.

Burned by an e-cig explosion?