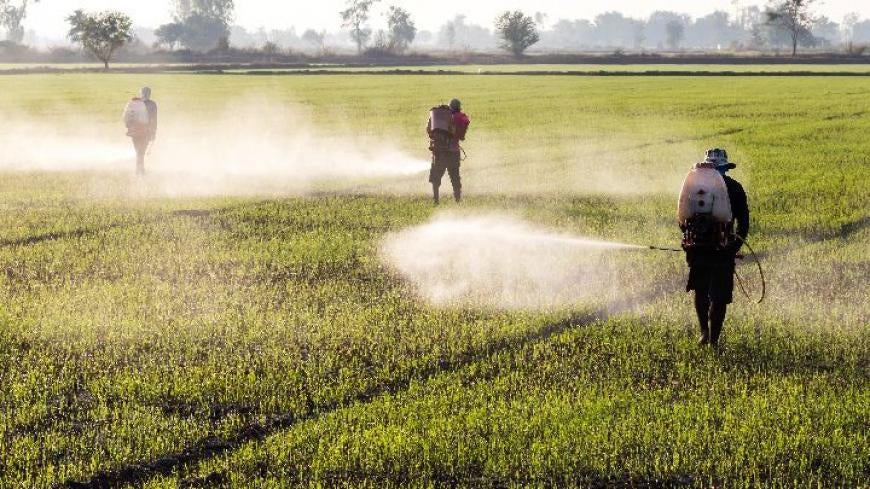 Monsanto is the unofficial king of Big Agriculture. As the world's largest seed company, their impact on the food we eat and even the quality of the water we drink is unparalleled—especially when their products are unsafe.

As a Fortune 500 company, it is no surprise that Monsanto has friends in high places. Investigative research like the Poison Papers show cozy relationships between Monsanto and the U.S. EPA—an organization which is supposed to protect the American people over corporate interest.

Where federal regulations have failed to adequately protect the health of consumers and the environment, some states have tried to step in. We take a look at the key legal battles between U.S. states and Monsanto, and show how the corporation has fought regulations every step of the way.

In July 2017, California listed glyphosate, the main ingredient in Monsanto's popular Roundup weed killer, as a probable carcinogen under their Prop 65 law. This classification may eventually require warnings on every Roundup product sold in the state.

California recognized glyphosate as a probable carcinogen after the International Association for Research on Cancer (IARC), a research arm of the World Health Organization, declared it as such. This classification should raise alarms since Roundup is the most applied herbicide ever. Some farmers have even filed lawsuits against Monsanto alleging the herbicide caused their non-Hodgkin's lymphoma.

Monsanto has since attempted to discredit the IARC, arguing that their conclusions were based on faulty research and therefore California’s classification of Roundup is misguided. They point to agencies like the U.S. EPA which have given the chemical a clean bill of health, even though internal documents allege that EPA officials conspired with Monsanto to publish conclusions that favored glyphosate’s safety.

In February 2017, a judge overturned Monsanto’s attempt to block the classification from going into effect. On November 15, Monsanto filed another lawsuit, but this time they enlisted help from agricultural organizations like the National Association of Wheat Growers. Plaintiffs now allege that the state’s actions are equivalent to “unconstitutional forced speech” and violate the First Amendment.

This isn’t the first time other states have ganged up against California’s regulations. In 2016, Alabama, Iowa, Kentucky, Missouri, Nebraska and Oklahoma filed a lawsuit against California over their law regulating the sale of eggs from caged chickens. A federal judge dismissed it, claiming they didn’t have the authority to sue another state.

Genetically modified organisms (GMOs) and herbicides go hand in hand. Monsanto, for example, produces Roundup Ready seeds that are genetically modified to be resistant to Roundup, allowing farmers to spray the herbicide in great quantities without killing their crops.

More than 90% of U.S. citizens favor GMO food labels, but legislation has been lagging, thanks to Big Ag's political influence.

According to a New York Times poll, more than 90% of U.S. citizens favor GMO food labels that disclose whether or not ingredients have been genetically modified. But legislation requiring labels has been lagging, thanks in part to Big Ag's political influence.

When California introduced Prop 37 in 2012, a bill which would require companies to label genetically modified ingredients in food products, Monsanto spent more than $8 million to oppose it. For perspective, the leading donor in support of Prop 37 was the Organic Consumers Fund who donated a little more than $1 million. Not surprisingly, the bill failed to obtain enough votes in its favor.

The law has been nicknamed "Deny Americans the Right to Know," or the DARK Act. Unlike Vermont’s law, the federal law allows companies to print QR codes and phone numbers that consumers must scan or call to learn if the product contains GMOs. These exceptions make the information less accessible, particularly to lower income consumers who may not own smartphones that can scan QR codes. Not surprisingly, the Roberts-Stabenow GMO bill was backed by Monsanto.

It isn’t just food labels that Monsanto has fought states over. They also challenged labels from dairy farmers that advertised that their milk was hormone free.

In the early 1990’s, Monsanto began manufacturing Posilac (rBST), or “recombinant bovine somatotropin,” a growth hormone used to increase milk production in dairy cows. In 2008, they sold it to Eli Lilly, but not before they waged war on dairy labeling throughout the country.

Milk from cows treated with rBST may include higher levels of insulin-like growth factor-1(IFG-1), which can increase the risk of breast and prostate cancers. The growth hormone is banned in the European Union, Canada, Australia, New Zealand, and Japan.

In 1994, soon after rBST was first available, Vermont tried to mandate labeling of milk from cows treated with rBST. The Grocery Manufacturers Association sued Vermont claiming that the law violated the First Amendment. A federal court sided with GMA, and the law was overturned.

The labeling issue reemerged roughly a decade later when consumers became more concerned about what was in their food. Dairies like the Oakhurst Dairy in Portland, Maine started to label their milk as free from growth hormones. Monsanto hit them with false advertising lawsuits claiming that all milk contains natural hormones. During this time, Monsanto filed complaints with the U.S. FDA and the Federal Trade Commission (FTC) in an attempt to get a nationwide ban on hormone milk labeling.

When a nationwide ban failed, Monsanto fought at the state level. They partnered with dairy associations and created fake “grassroots” groups—like the Monsanto-backed American Farmers for the Advancement and Conservation of Technology—to introduce legislation banning hormone-free dairy labeling at the state level. Monsanto tried this in Kansas, Indiana, Ohio, and Pennsylvania, but all of these bills failed to pass or were defeated in state courts.

Glyphosate quickly became too popular even for Monsanto's liking, and spawned glyphosate-resistant super weeds. Monsanto's answer to their man-made ecological problem is the herbicide Dicamba.

The U.S. FDA recently approved Monsanto's dicamba-resistant seed, causing some farmers to spray the volatile herbicide on their crops before dicamba was approved for that. It's estimated that the illegal application of dicamba damaged three million acres of U.S. soybean crops. But even newer versions of the herbicide haven't proven to be safer.

Arkansas, Missouri, Minnesota, North Dakota, and Tennessee have all issued some form of ban or restriction against dicamba in order to prevent further damage to their farmers and economy.

Missouri will ban dicamba in some counties starting June 1, 2018 before a ban for the entire state goes into effect July 15, 2018. Tennessee is banning older versions of dicamba from May 15 through October 1 and is requiring that farmers use hood sprayers for newer formulations from July 15 through October 1.

North Dakota and Minnesota have issued temperature restrictions: Starting in June of this year, farmers can’t spray dicamba when it is 85 degrees and above since the herbicide evaporates more quickly at higher temperatures, exacerbating its propensity to drift onto neighboring crops.

Even though pictures of decimated crops speak for themselves, Monsanto is still challenging these restrictions.

Monsanto filed a lawsuit in Pulaski County Circuit Court to stop Arkansas' proposed dicamba ban from taking effect. The court, however, said the case was moot since it hinges on future events and injuries which may not occur. Despite Monsanto’s fight, Arkansas lawmakers recently approved a ban on Dicamba application from April 16 through October 31, 2018.

Polychlorinated Biphenyls (PCBs) are chemicals that were used widely for their heat-retardant characteristics, particularly as insulators in electrical equipment, until they were banned in 1979. PCBs are a known carcinogen, and have been linked to melanoma, non-Hodgkin’s lymphoma, pancreatic and liver cancers, and neurological disorders.

In 2016, a St. Louis jury ordered Monsanto to pay $46.5 million in a lawsuit filed by individuals in areas polluted with PCBs who alleged their non-Hodgkin’s lymphoma was caused by the chemical.

But in addition to harming human health, these man-made organic chemicals are also problematic for wildlife in that they don’t naturally biodegrade.

It is estimated that Monsanto manufactured 1.4 billion pounds of toxic PCBs.

Until the ban on PCBs, it is estimated that Monsanto manufactured 1.4 billion pounds of these toxic chemicals. Though it’s been nearly 40 years since PCBs were legally manufactured, some U.S. waterways are still contaminated with them.

The chemicals can drift from their original source and pollute waterways when it rains. When they settle in sediment, fish can consume them. Contaminated fish are the most common way humans are exposed to PCBs today.

Cities and states are now filing lawsuits demanding that Monsanto pay for cleanup and stormwater system retrofitting costs. Lawsuits allege that Monsanto was aware of the dangers of PCBs and the possibility of contamination before the chemical was banned.

Oregon’s Attorney General Ellen Rosenblum filed a $100 million lawsuit against Monsanto on January 4 for contamination of the state’s waterways, including Portland Harbor. In the complaint, Oregon alleges that Monsanto knew for decades that PCBs were toxic. Washington state and cities like Seattle, San Diego, San Jose, and San Francisco have filed similar lawsuits.

This isn’t the first time Monsanto has had to confront PCB contamination in court. In Anniston, Alabama—the town where Monsanto manufactured PCBs for 40 years—the soil was so contaminated that children were told not to play in their yards.

Allegedly, Monsanto dumped tons of PCBs directly into the creek that ran alongside their Anniston manufacturing plant. Twenty thousand current and former residents filed lawsuits against the company, which Monsanto settled for $700 million to cover damages and cleanup costs.

Around the same time that Monsanto was manufacturing PCBs, they were also producing 2, 4, 5-Trichlorophenoxyacidic (2, 4, 5-T). 2, 4, 5-T is an herbicide that was a key ingredient in Agent Orange, the toxic defoliant responsible for 400,000 deaths and injuries in Vietnam, 500,000 birth defects, and a number of leukemia diagnoses among American veterans.

Between 1949 and 1971, Monsanto manufactured 2, 4, 5-T in Nitro, West Virginia. The chemical produced a dioxin byproduct, a known human carcinogen for which there is no safe level of exposure. In the company’s defense, they manufactured the chemical at the request of the U.S. government. But in doing so, they left behind a community suffocating with dangerously high levels of deadly toxins.

Nitro residents were exposed to dioxins at levels that are 100,000 times higher than what is acceptable.

In the mid-1980’s, the EPA ordered Monsanto to investigate and cleanup the contaminated area, resulting in the removal of 500 gallons of dioxin-tainted soil. Dioxins were also found in local waterways like the Kanawha River and landfills. Overall, Monsanto was responsible for creating three active toxic cleanup sites in the community.

Nitro residents filed a class action lawsuit against the company alleging that Monsanto’s activities contaminated the town with dioxins at levels that were 100,000 times higher than what is acceptable. More than one hundred individual lawsuits alleged that this pollution caused their cancers.

In 2012, Monsanto settled the dioxin class action lawsuit for $93 million: $84 million would go towards medical monitoring for former and current Nitro residents, and the remaining $9 million would be spent to professionally clean homes in the area.

While the state of West Virginia wasn't involved in litigation, the fact that a small town with a population of around 7,000 people could ban together and hold a company as powerful as Monsanto accountable for their actions is inspiring.

You Can Fight Back, Too

Monsanto has proven time and time again that they will do anything to fight regulations that put consumer safety over profits. If you were diagnosed with non-Hodgkin's lymphoma after using Roundup or suffered crop damage after using dicamba, you may be eligible for a lawsuit against Monsanto.

Contact our attorneys for a free, no-obligation legal review. It never costs a thing unless a win a verdict or settlement for you.